Why So Many Women Entrepreneurs Are Struggling in Their Business, And What We Need to Do About It (Part Deux)

In the XY Economy™, there’s only one Way to Do Things, and that’s to make truckloads of money by adhering to a particular set of marketing tactics — which I lovingly refer to as ‘Bro Marketing™’.

Bro Marketing™ is what most businesses have been doing since the dawn of online marketing. So much so that it’s widely thought of as just… marketing.

Its primary motivator is to yield the most money from the most people in the shortest amount of time possible, by manipulating human psychological triggers to compel a desired action (usually a purchase).

And the truth is, many of the female influencers and thought leaders we admire use this framework, too.

Whenever you seek out marketing guidance, whether it’s an online / DIY course, someone you hire, or even just a list of best practices (for blogging, for a particular platform, etc.), you’ll find a million-and-one templates, blueprints, how-to guides, YouTube tutorials, email courses, etc.

And as you explore these myriad options, you’ll notice two things:

Now. Even though most of the foundational pieces of Bro Marketing™ were created by men (think Frank Kern, Ryan Deiss, Jeff Walker, etc.) the people USING Bro Marketing™ can be feminine AF: That’s because it’s less about the bros themselves (although, eye roll), and more about a predominantly masculine approach to marketing.

They’re not trying to trick you or anything. Lots of marketers may not even know they’re using a tactic that originated from Jeff Walker’s Product Launch Formula (PLF), for example. They’re just mimicking Marie or Amy, because Marie and Amy are clearly kicking ass.

But they’re the exception, not the rule. And girlfriend? YOU’RE NOT THEM.

I’m not saying you’re not as good as they are. I’m saying:

This is why parroting everything your mentors do doesn’t yield the same results they get.

In fact, it’ll mess you up even more.

Bro Marketing™ is a very forceful way to market. And yes, that absolutely means what you think it means. Forcing you through a sales funnel, force-feeding you content 24/7, etc.

Yes, this applies even when you’ve willingly opted in to gain access.

But it also refers to an overall approach to building and running your business. A decidedly masculine one.

One of my favorite books is Power Vs. Force by “healing psychiatrist” David R. Hawkins. (I’m not throwing shade with those air quotes, btw. That’s just an uncommon job title).

According to Dr. Hawkins, there’s a spectrum of human emotion that determines how we move through life. At one end of the spectrum are things like fear, shame, and pride. At the other end is acceptance and reason.

This is why it’s soooo difficult to untangle yourself from the XY Economy™:

XY buy-in requires you to surrender your gut instincts in deference to others. But the XY worldview is what seeds that self-doubt in the first place.

In other words, all this —

— is only able to persist because you’ve unconsciously agreed to the premise that you know less about running your business than “they” do.

Let’s look at how this shows up in everyday entrepreneuring:

“I don’t agree with this, but oh well. She’s the expert; she must be right.”

“Aw man, I have to do a webinar? I hate live video! But that’s what [expert] says to do, so I guess I’ll slog my way through it.”

“I’m feeling so much resistance to [insert tactic here]! That must be a sign that I have some serious work to do on myself.”

^^That last one is the ultimate XY loophole, by the way — you trick yourself out of trusting your instincts by reframing your warning bells, or ignoring them altogether. We’re gonna talk about the consequences of doing that, next.

Ugh. You know what this sounds like to me?

Trying your hardest to rock a pair of “boyfriend” jeans, even though they make your curves disappear and give you weird crotch issues. 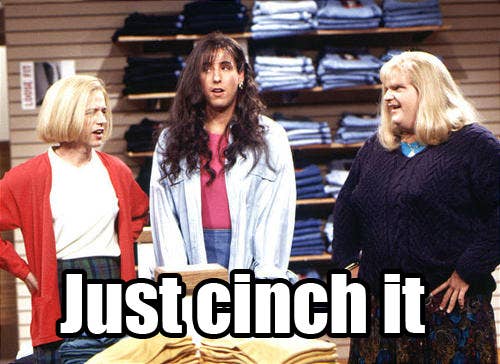 The XY Economy™ runs deeper than a passing trend, though. Sticking with the jeans metaphor (cause I’m tenacious like that) — the physical pair of jeans is just one manifestation of a vast system of beliefs and assumptions about jeans. It’s like, the whole ideology behind jeans. How to wear them. When to wear them. What happens if you decide not to wear them.

But you don’t have to squeeze yourself into some masculine paradigm that wasn’t made for you, and doesn’t serve you.

The XY Economy™ has you all turned around, thinking the problem is that you don’t have enough clients. Or that your list isn’t big enough. Or that your rates are too low.

So (since XY is an outside>in model), you go chasing after all these “solutions” and  “experts,” throwing money at business blueprints and plug-n-play marketing tactics. Anything that seems like it’ll help. (Because let’s be honest, you’re kinda freaking out).

But really, all that noise is just distracting you from what you really need to be focusing on.

The problem isn’t Bro Marketing™, or even the XY Economy™ at large. It’s that none of those elements are the right natural fit for your business. In your rush to plug up the holes, you’ve skipped the most important part.

A woman who insists on having a sustainable income and remaining true to her unique values, goals, and desires — who builds her business in a way that accentuates her assets instead of camouflaging them in a sea of Bro Marketing™ — well, that’s a whole new paradigm.

It's what I refer to as the XO Economy™.

And no, I’m not talking about drawing hearts and sprinkling glitter over everything.

XO runs much deeper than that… all the way to that steady, sustainable, respected business you’ve been working so hard for.

1) Bro Marketing™ is widely accepted as the only way to market, but it’s based on masculine values and behaviors.

2) The XY Economy™ keeps you in the dark about the other aspects of your business, so you keep chasing tactics around.

5) The XY Economy™ has you believing the problem is that you don’t have the right marketing tactic(s). But throwing money at tactics is making the problem worse, AND keeping you from moving into the XO Economy™.